Will and Jane at the Folger Shakespeare Library

The Folger Shakespeare Library in Washington DC Presents Will & Jane: Shakespeare, Austen, and the Cult of Celebrity (Aug 06 – Nov 06, 2016).

An opening celebration will take place on Friday, August 5th beginning at 7:00. LIMITED tickets are available to JASNA members. Contact Tiffany FitzGerald 202.675.0359 tfitzgerald@FOLGER.edu for more information. (Limited to the first 20 people who inquire.)

“Will & Jane: Shakespeare, Austen, and the Cult of Celebrity will take a close look at these two celebrated authors’ literary afterlives—and find some surprising parallels. For both, adaptations and parodies in different eras helped popularize their work and make it more approachable (think Shakespeare Undead and Pride and Prejudice and Zombies). Milestone events also increased their fame: for Shakespeare, the much-heralded 1769 Shakespeare Jubilee, and for Austen, a burst of 1990s films and a watershed BBC production. From portraits to porcelain collectibles, branded merchandise, and gravestone rubbings, these two authors have traced intriguingly similar arcs in their posthumous fame. Explore their stories and the nature of celebrity in the 400th anniversary year of Shakespeare's death and the 199th anniversary of Austen’s in 2016.” (—from www.folger.edu) 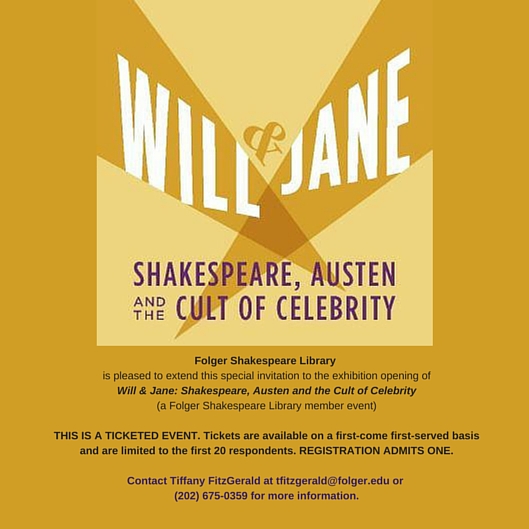